Every time I post a story, I think of familiarities of past stories or those that I would like to do in the future. It’s like I am past, present and future all in one. If you have been following my stories and social media for the past few years, you would have noticed common themes throughout. When I have editorial presented in front of me, there are some definite common threads of what I am drawn to. As I was preparing a new post the other week, I thought about the male models that were my favourite faces. I went back through my posts, social media and all the things I have worked on and found my Top 5 male models, and what a great task that was! I tried to do a Top 10 but I kept arguing with myself (yes, it was interesting) over who should be in and who should be out, but I did make my Top 5. I hope you enjoy and if you would like to see more of a particular model on The Man Has Style, please leave me a comment below. David Gandy by Melissa Uren for The Man Has Style at London Collections: Men

David Gandy not only looks the part, he is also a big supporter of men’s fashion and is actively involved in promoting this. His love of cars and dogs doesn’t go unnoticed either, along with his very down to earth attitude. It was a pleasure to have him pick up my story and accompanying photos by Melissa Uren for The Man Has Style at London Collections: Men earlier this year and share with his followers (read here).  I have featured him so many times on The Man Has Style over the past almost three years, I couldn’t go passed him being in first. With so many amazing campaigns he has featured in, his look is universal and appeals to so many. Jon Kortajarena. Goodness me, he was so close to number one, in fact, it took me so long to write this post as I kept going back and forth on who would come in but he was slightly edged out by Mr Gandy! Striking and absolutely beautiful, Jon Kortajarena can take your breathe away in photos. Not only in photos either! I was watching A Single Man again on the weekend, and his role as Carlos in that also makes you take notice. His work is wonderful and following him on social media, he has such a wonderful energy. Right up there with the best! How wonderful is Sean O’Pry? I say, absolutely wonderful! He has such a clean, healthy look and strong facial features with striking eyes. His editorial work is beautiful. I always feel he has a timeless appeal, one that could be from so many eras. Sean O’Pry really knows how to look good in photos! Parisian model Clément Chabernaud, shot by Andreas Larsson and styled by Hannes Hetta, for the Spring/Summer 2013 issue of Man About Town. Clément Chabernaud is exquisite in so many campaigns. His presence is captivating and he also looks spectacular in a suit. Needless to say, he has featured many times on The Man Has Style. His look is pure class and often with an air of mystery. I always think of Clément Chabernaud as belonging in a film as he was with De Fursac for Winter 2013 (see here). 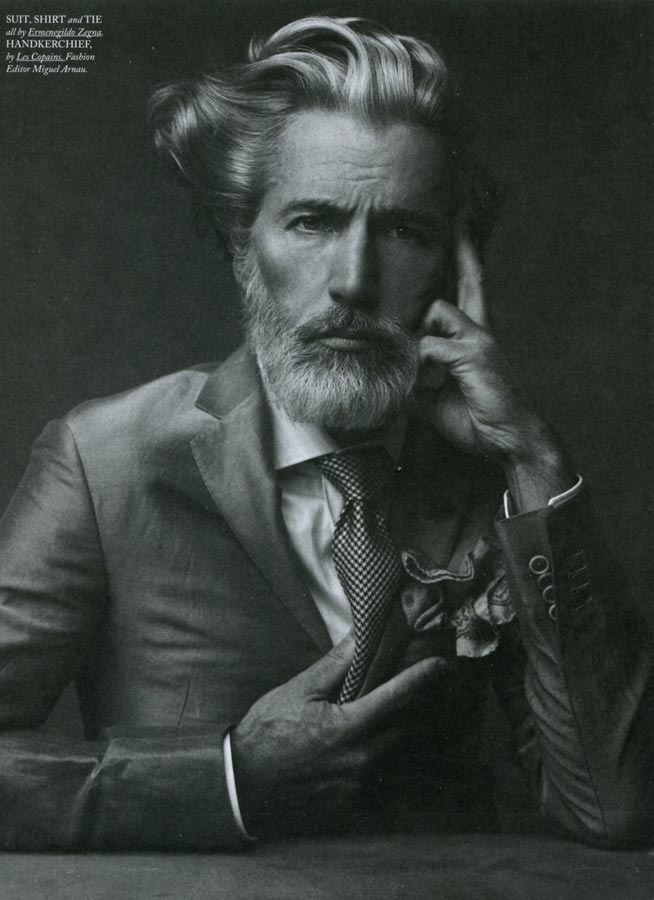 What can I say? Aiden Shaw is a favourite of mine for sure. His look helps capture the quality of the clothing he wears. Silver flowing hair and a magnificent beard, his look is distinguished and strong. Alongside his wonderful modelling work, he is also a writer and musician.